Last week the Gallup organization released a new report on the State of the American Workplace:

According to this new survey, 70% of American workers don’t like their jobs. About 50% of workers are ‘disengaged’ – they punch the clock and put in their time, but aren’t inspired by the work they do. More disturbing, 20% of workers are ‘actively disengaged’ – meaning they are gossiping at the water cooler, stirring up trouble, and even sabotaging the firm’s success. This is astounding. And the fact that this new report isn’t stirring up more serious outrage is itself an indictment of the sad status quo in the American workplace. Today disengagement is the norm; positive engagement is the extraordinary outcome.

Professional services firms may be worse. These organizations (architects, lawyers, engineers, consultants, and the like) are characterized by a high level of project work, decentralized authority, and considerable managerial autonomy. Much of the work of professionals is done in small groups. Alignment of the larger organization usually isn’t necessary for project success – only for those business initiatives that affect the whole firm. And alignment is usually much higher within the project team than it is between teams.

For professionals the real problems begin at the top, with misalignment and disengagement of the principals, who then together set a tone of dysfunction for others. As I’ve described before, the professional firm often looks like a round rudderless raft, with each principal paddling alone, and (as a result) the boat spinning round and round. Add in a challenging economy, commands to “paddle faster,” and well, you get the picture.

Ironically, the path out of this mess – towards growth, profit, and sustainable success – is pretty straightforward (simple, but not usually easy). From the inside out, organizations can reengage their staff through a straightforward process that involves discussion and debate, building consensus, creating alignment, and taking action to achieve important objectives. Too many firms today seem doomed to mediocrity (and eventual failure) because they can’t or won’t choose this road. Instead these organizations will continue to build their future on shaky ground: current obstacles and constraints, haphazard strategies, and shortsighted crises.

If you’re looking for a formula for sustainable success in the Fast Future, consider building a foundation for your firm on the strengths of powerful leadership engagement, using a process that includes:

Discussion– It’s imperative that any business improvement or change management project start with engaging the broader team in a discussion (and debate) about options and choices. The CEO who believes he or she knows everything, and knows what is best for the organization, misses the fundamental point. Unless senior leaders plan to do all the work themselves, they must engage others (managers and staff) in this conversation, if for no other reason than to create better understanding and buy-in for the eventual course of action. (God forbid that someone else might have a good idea to share).

Consensus– With options springing up from a healthy debate, leaders need to develop consensus (agreement) on which way to go, on what to do and what not to do. In the organization, it’s a special kind of consensus that’s needed. It’s not the autocratic “teamwork is a lot of people doing what I say” version; neither is it the path of the one man, one vote, Athenian democracy where all ideas have equal consideration, and the agreement reached is a lowest common denominator of little value. [It may be true that in life there are no dumb questions – but there certainly are some dumb ideas].

Alignment– Developing consensus drives the process of alignment – more people in the firm coalescing around common values, beliefs, and strategies. Alignment is the team ‘getting on the same page,’ organizing together to better accomplish the mission. It’s the single most important factor of organization success; without alignment there is little action, and the consensus eventually falls apart.  Alignment too is something to be protected. Once achieved, the team will often self-police (and even cast out) the bad actors – those working to actively disengage others from the goal.

Action– It is true that without action there is no achievement, and it’s also true that effective execution (the doing of things) is the most obvious issue (problem) in organizations today. But in reality, meaningful action flows naturally from a high level of consensus and alignment. Folks who agree and are committed usually can’t help but work together to achieve important stuff. Look around.  Examples of highly engaged teams – food bank volunteers, firefighters on the line, the firm’s top-performing project or client teams – abound. What’s common to all of them is a high level of trust, developed through the work of discussion and debate, consensus building, goal alignment, and commitment to action. Within these teams the members are engaged – they like their jobs.

If 70% of American workers are not engaged (they don’t like their jobs), and if nearly a third of these are in fact actively working to hinder the success of others, then it must be true that addressing the issue of team engagement is a good business strategy per se. In an environment of continued uncertainty, increasing volatility, and near constant, nonstop change, it’s encouraging to find substantive opportunity for business improvement today right inside the firm. More leaders aren’t working on this opportunity because it’s hard – (it’s not complex, just not easy). But hard is good, because it’s potentially more distinctive, more meaningful, more aligning. Here’s what John F. Kennedy said in September 1962, further explaining the purpose of the space race:

If you’re ready to make some real progress – to reach for extraordinary growth, profit, and success for your firm – then give us a call, and let’s go to work. 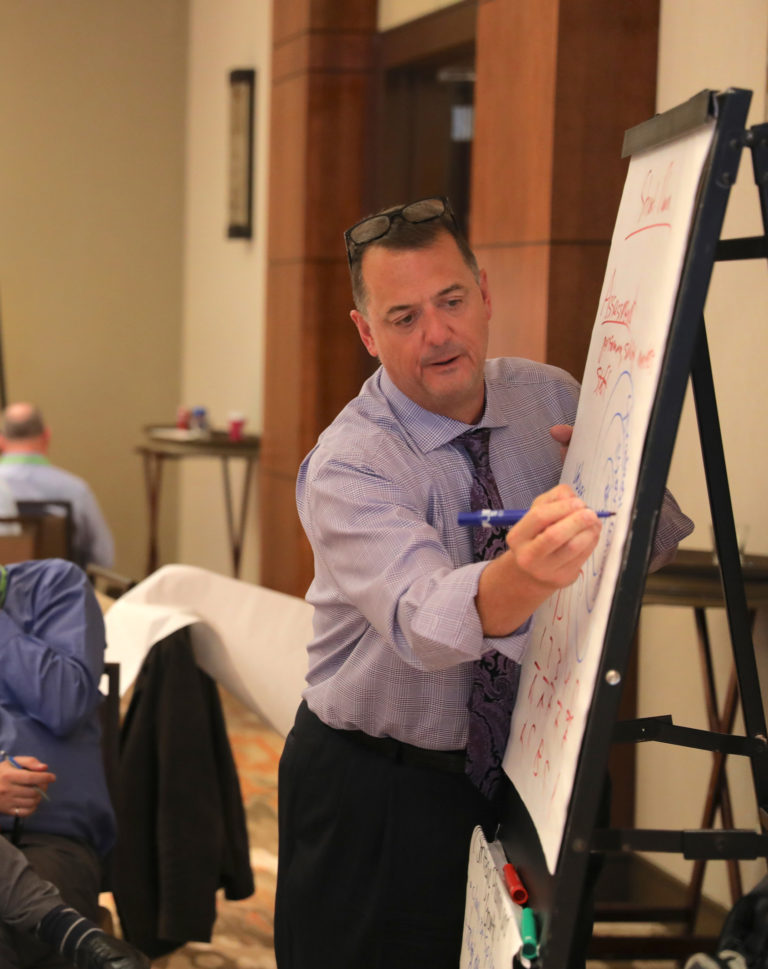